At dinner I look over at E to find her craning over sideways in her highchair, toward D, making her lips into a kiss.

I’m in the kitchen, chopping something at the counter, and I feel two little arms hug my knees. I look down to find E and hug her back.

M wakes up crying from a nap. When I lift her from her crib she squeezes me tight. I hug back.

Holding both twins in my lap I give them each a kiss on the head. M looks at E and leans over to give her a kiss. E kisses back.

Seeing a cat at a friends’ house, M tries to give it a kiss.

We’re reading a book, Panda Bear Panda Bear, What Do you See? M leans down to give the water buffalo a kiss, and E kisses the lion.

We’re reading a book about shapes. M gives a kiss to the square.

At first, seeing that, I feel disheartened. Maybe they don’t really understand.

But on second thought, I think that square feels better.  I think they know about love. 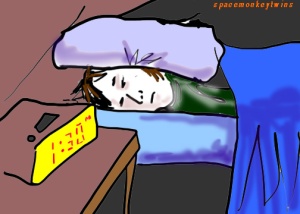 Nighttime, for the past couple weeks, has been a bit rough. If this post is somewhat incoherent, I’m blaming it on the lack of sleep.

Last night we almost made it. We slept solidly from about 9:30, through the night with no interruptions…until 4:40 a.m. At that point, the crying in my dream became crying in reality, and D and I were awake in the bedroom in the dark. At first waking, I somehow assumed it was 6 am. My first thought was, “man, I feel tired,” and I had the sinking feeling that I would never wake up feeling rested again. Then I looked at the clock.

When we became conscious enough we could tell the crying was M. This was hopeful. M is usually not so difficult at night. A quick visit crib-side, lay her back down, a soothing tummy rub for a second or two and she’s back out, breathing deeply.

This time D went in for night duty. I heard him make his way around our bed; the babies’ doorknob clicked, then the nursery floor creaked as he crossed to the crib. For a moment there was no crying. Sweet silence. Then the floor creaked as he made his way out…”waaaah” another cry started up, E this time. D’s silhouette reappeared in the bedroom, quickly crossing to his side of the bed. “Damn! Damn! Damn!” We lay in the dark for a moment, not breathing, praying for her to fall back asleep.  The cries continued, increasing in urgency.

After that I don’t really remember (did we go back in, rock her, only to have the creaky floor wake her again as we tried to sneak out? Did they cry intermittently until 6, waking each other? Did I go in fruitlessly after 5 minutes, then 10, then 20? Eventually we brought E into our bed. Or was it M we brought?The nights blur together. In any case, there was no more sleep.)

IF YOU LIKE MY BLOG, click this “Mommy” badge! It helps my ranking on that site, and then more people visit. Yay. If you really love me, you can do it once a day.