I am still unshowered and it is now 2:36 pm. Last night I forgot (seriously) to change out of my shirt before going to bed, so this is the same shirt I wore yesterday and slept in, too. And now, in this precious time while both twins are asleep, I’m writing another blog post instead of taking a shower and making myself presentable. Priorities!

So this morning, after managing to get down to the street with both babies plus the stroller, I discovered I’d forgotten the rain covers.  It was overcast and threatening. The twins were both in their car seats, strapped into the double stroller. For a minute I looked back at the steep stoop to the first floor. There was no way.

Here is my process of getting out of the house:

1. Step one, finish feeding and changing both twins. The clock is now ticking until they eat again in two hours. Put one down in the car seat; she immediately starts crying. Put the other one in the other car seat; she seems okay. Make sure everything I need is in the diaper backpack, put it on my back.

2. Bring one twin out to the landing in her car seat. I live on the second floor of a brownstone (a limestone, actually, but who’s counting).

3. Lug the other twin out to the landing.

4. Haul one twin in car seat to the bottom of the first flight of stairs.

5. Lug the other twin in  car seat down the stairs. …halfway (!), but now there’s the stoop steps down to the street.

6. Wrestle the (very heavy, double) stroller, which I hope no one objects to me keeping in the downstairs hall, down to the street along with two unwieldy car seat attachments. Bang them around my ankles while trying to yank them through the small front door opening. One twin still screaming.

7. Bring each twin out to the outside top of stoop landing. Twin A now so red and sweaty from crying I begin to worry about her overheating.

8. Bring crying twin in car seat down to street level…

9. …then bring the other down, and finally assemble both car seats with attachments onto the very large stroller at the bottom of the stairs (which I’m thankful, each time, hasn’t been stolen during the course of this.

This was eight trips up and down stairs, if you’re counting. One twin is now crying so hard she’s choking and gasping for air, alarmingly, sweatily red. Somewhere in here the neighbor stops to say hello. Two Chinese ladies also stop and ogle from the street, holding up two fingers and widening their eyes. “Two?” they smile. I can’t really focus. The rain covers were in the other stroller, all the way upstairs on my apartment landing.

I looked up at the sky: dark and threatening. I had looked at the weather that morning and remembered something about a 50 percent chance of rain. But I’ve made a resolution to get out of the house at least once per day. For my sanity. A bit of chill wind rippled the light blankets on the babies. I took the walk anyway. 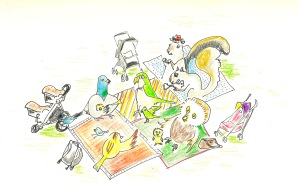 Sparrow: “That hat is so cute!”

Parakeet: “I made it, it was actually pretty easy.”

Sparrow: “I want to get a sewing machine so I can make cute baby hats.”

IF YOU LIKE MY BLOG, click this “Mommy” badge! It helps my ranking on that site, and then more people visit. Yay. If you really love me, you can do it once a day.